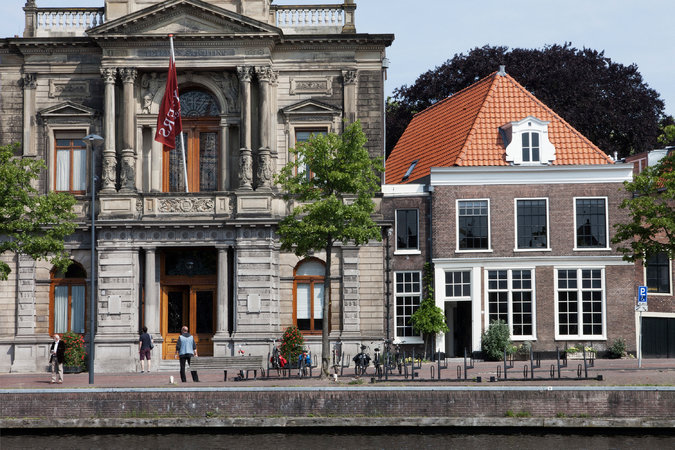 HAARLEM, The Netherlands — Church bells echoed along the red brick streets, their sound rising above the Spaarne River and spilling through the large front windows of Pieter and Marieke Sanders’s home, which stands along its banks. Here and there, bicyclists paused to listen as dusk settled across the town where in the 15th century the devoted Catholic Dutch, then under the rule of Spain, began pilgrimages to that country’s holy site of Santiago de Compostela.

The house was probably built around that time, or maybe earlier, said Mrs. Sanders, a former member of the European Parliament. Although its facade and inner walls were rebuilt in 1887, the original frame and beams are intact.

But the red brick house is new to the Sanderses, who moved here just a year ago from an eight-room house in the nearby town of Aerdenhout, where they had lived for 35 years. They have been traveling often now that their children are grown, making it difficult to maintain that house’s large garden. Several friends and family members had also moved to Haarlem and to Amsterdam, so “it was time for a change,” Mrs. Sanders said.

In June 2010, after friends told them that the Haarlem house was for sale, the couple visited and immediately fell in love.

“The location is excellent, right in the middle of town and on the river,” Mrs. Sanders said. “It would have enough space for us to live and entertain and also nice high ceilings to hang art.”

This last fact was critical. As avid collectors whose renowned contemporary art collection includes thousands of works, the couple required ample space for as many pieces as possible.

What also made the house attractive was its spot next to the Teylers Museum, the oldest museum in the Netherlands. In fact, when the museum was created in 1778, the house and seven neighboring buildings were purchased by the Teylers Museum Foundation. It was responsible for the 1887 rebuilding and, later, selling the house to benefit the museum coffers.

But, enchanted as the couple were, the house’s eight rooms needed substantial structural improvement and modernizing, both to suit their aesthetics and to create an appropriate environment for their art.

Renovations to the home, which covers 380 square meters, or 4,090 square feet, began in February 2011 and took a full 10 months to complete. Even then, the Sanderses remained in Aerdenhout to complete the sale of that house, which took an additional three months.

In the interim, they organized art exhibitions in the empty house, Mrs. Sanders said, “and celebrated my 70th birthday with lots of friends and family — great fun.” They moved into the new home, she said, on March 1, 2012.

The couple handled most of the redesign themselves, engaging Wade Schrijver, an interior architect and art historian in Amsterdam, only for advice on the kitchen and the two and a half baths. Fortunately, the house’s status as a registered national landmark allowed the couple to seek government grants for some of the €1.25 million, or $1.6 million, in renovations that were needed.

Landmark status also required them to preserve or to restore as much of the structure as possible, a stipulation that ultimately worked in their favor. Owners in the 1970s, for instance, had lowered the dining room ceiling in keeping with the style at that time. The Sanderses removed the false ceiling and, in the process, rediscovered and restored a 19th-century medallion underneath.

With Mr. Schrijver’s design advice, a utility room and pantry were converted into a bright, minimalist kitchen. In turn, what had been the adjacent kitchen became a large dining room, where a set of Arne Jacobsen “Butterfly” chairs now surround a Jacobsen dining table. “Schlemiel” — a large steel, iron and wooden sculpture of a dark, humorous figure seated on old barrels by Uwe Henneken — also presides over every meal.

A glass roof above the dining room and glass doors that open onto the small back garden add an airy effect; thick red carpeting and large-scale sculptures create an unexpected sense of coziness in keeping with the house’s overall feel.

Elsewhere in the home, small sleights-of-hand allow the original medieval architecture to blend neatly yet artistically with the couple’s own avant-garde aesthetic.

When a wall in the master bedroom upstairs was removed and an adjacent one was recessed, for instance, the couple left the 600-year-old vertical oak beams intact. The new walls allow the heavy square beams to show through, transforming them from merely structural elements into essential ornamental details.

In addition, a pale gray Formica and aluminium cabinet, custom designed by Mr. Schrijver in 2007 to house Mrs. Sanders’s collection of 18th- and 19th-century netsuke, miniature Japanese sculptures, was positioned at the other end of the bedroom to create a high partition. The divider creates a bright, contemporary dressing area, a stark contrast with the dark beams along the ceiling and walls.

Other mixes of old and new prevail throughout the three-level home, which is unified by a modernist color scheme of gray, black and white. Red-stained oak floors glow beneath the black leather Le Corbusier couch and a slate-colored Eileen Gray love seat in the upstairs living area.

On the landing, a 19th-century Japanese cabinet is flanked by a cream-hued contemporary ceramic tulip vase by Takeshi Yasuda, a 1991 pale-wood structure by the Dutch artist Eduard Wind and a 2010 work called “Eda” (“Branch”) by Nobuaki Onishi, a Japanese sculptor.

A narrow stairway, typical of old Dutch homes, leads to the top floor, where Mr. Sanders, a retired corporate lawyer and former judge, keeps his private office. Here he manages the couple’s art collection surrounded by some of his favorite works, including a flag by the Dutch Nul artist Armando and objects by the British sculptors Norman Dilworth and Maggi Giles, all of which sit poised on glass shelves newly built into the centuries-old rafters. The space converts easily to a guest room when any of the couple’s several grandchildren come to visit.

While the Sanderses had some pangs of regret about leaving their previous home, with its dramatic, Hollywood-style sweeping staircases, gated formal gardens and long driveway, they harbor no regrets about the move.

“Life changes when your children don’t go to school anymore,” Mrs. Sanders reflected. “This is a new phase. We’re happy for it.”